Robot Renovation
After lots of hard work, Capitals Engineering had finished building and programming a working robot to compete with in our first tournament. Although we were confident and played well, some problems arose within the robot, which was to be expected seeing as how the tournament was the robot’s first true test of strength and efficiency.
There were a few issues with the design of the glyph block collecting mechanism. It was based on a sliding concept in which blocks would be moved up a ramp. This design involves multiple steps and was not efficient enough to score a sufficient amount of points. A new design for a block-pinching mechanism is now in the process of replacing the block-slide. The one challenge that the team foresees is implementing it into a robot that was designed around the block-slide mechanism.
Another challenge that the team faces is programming. With a new mechanism comes different motors and servos that are used to do different tasks. The same programming can no longer be used to control this new mechanism, so the team must now reprogram their block-pinching mechanism. This will require time because the new program must constantly be tested to find optimal settings for completing the task. 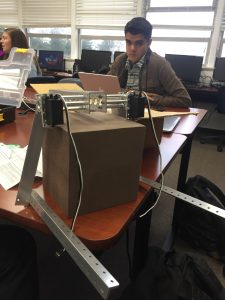 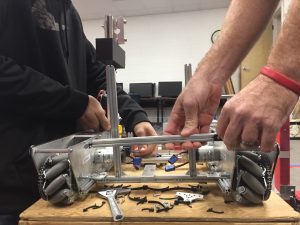 Posted in Our Team